Even before the Taliban takeover, some US-trained, English-speaking pilots were tracked down by the terror group when they went off-base and were assassinated. 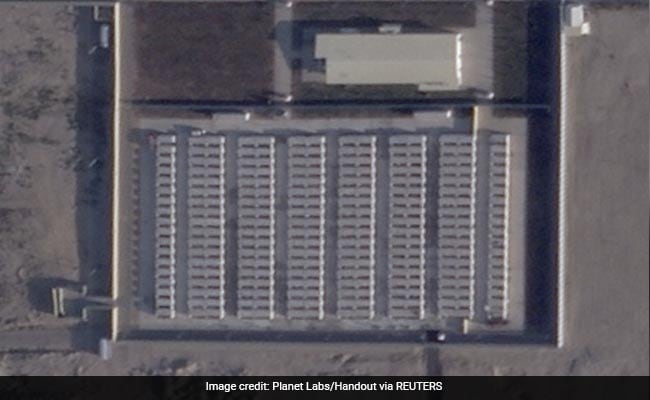 Satellite image of Uzbek camp, located just across the border from Afghanistan

The US-trained Afghan pilots and others held at a camp in Uzbekistan already feared being sent back to Taliban-ruled Afghanistan. So it was little comfort when an Uzbek guard unsympathetically quipped the other day: “You can’t stay here forever.”

The offhand warning added to an already grinding sense of unease at the camp just across Afghanistan’s northern border, recounted one of the Afghan pilots who fled there with aircraft when ground forces fell to the Taliban in August as the United states and its allies withdrew their forces.

What follows is the first, detailed inside account among Afghans who, for nearly three weeks, have been waiting in vain to be evacuated by the United States.

“If they send us back, I’m 100 percent sure they’ll kill us,” said the pilot, who declined to be named because of fear of reprisal.

Speaking to Reuters on a cell phone that the Afghans there try to keep out of sight, the pilot described feeling like a prisoner, with highly restricted movement, long hours in the sun, and insufficient food and medicine. Some have lost weight.

“We are kind of like in jail,” said the pilot, who estimates the Afghans held there number 465. “We have no freedom here.”

Late August satellite images provided to Reuters showed high walls surrounding the camp, whose housing units had been used previously to treat COVID-19 patients and is near the city of Termez. Images shared with Reuters from inside showed sparse white rooms with bunk beds and no clutter – since most Afghans arrived with just the clothes on their backs.

Uzbek guards were armed, some with handguns and others with semi-automatic weapons, the pilot said.

The camp risks turning into another crisis for U.S. President Joe Biden, who was criticized left and right for the poor planning of evacuations that marked the end of America’s longest war and the Islamist terror group’s swift takeover.

Senator Jack Reed, a Democrat who chairs the Senate Armed Services Committee, said he was “deeply concerned” about the Afghan pilots and other forces there.

“It is imperative that these personnel not fall into the hands of the Taliban both for their safety and the valuable technical knowledge and training they have,” Reed told Reuters.

John Herbst, a former U.S. ambassador to Uzbekistan, said he believed Uzbekistan faced real and substantial pressure from the Taliban to hand them over.

Retired U.S. Brigadier General David Hicks, who commanded the training effort for the Afghan Air Force from 2016 to 2017, said the State Department had failed to act fast enough after being supplied details about the Afghans being held at the camp from a network of current and former U.S. service members and lawmakers.

“I’m not sure what they’re doing at this point, to be honest,” said Hicks, who is among those working to help the pilots and their families.

A State Department spokesperson said the United States was coordinating with Uzbekistan on the matter but stressed that Afghan personnel and aircraft were secure. It urged all of Afghanistan’s neighbors to allow Afghans entry and to respect international law against returning refugees to countries where they are likely to face persecution.

Uzbekistan’s government did not respond to multiple requests for comment.

Even before the Taliban takeover, U.S.-trained, English-speaking pilots had become their prime targets. Taliban fighters tracked them down when they went off-base and assassinated some pilots.

In the final days and hours before losing the war to the Taliban, some Afghan pilots staged a stunning escape by flying 46 aircraft out the country before the Taliban could take them – more than a quarter of the available fleet of about 160 planes.

Most flew from Kabul but some came from a base just across the border near the northern city of Mazar-i-Sharif, fleeing Taliban fighters who were storming the base after ground units collapsed. In a dramatic episode, one of the Afghan aircraft collided with an Uzbek jet, forcing the pilots to eject.

Besides dozens of pilots, there are Air Force maintenance personnel and other Afghan security forces at the camp. Some managed to cram family members onto aircraft but most are fearful for their loved ones across the border.

“There weren’t any more ground forces. We fought until the last moment,” the pilot said.

One U.S. military official, speaking on condition of anonymity, commended the Afghans in Uzbekistan for taking the planes out of Afghanistan.

“The only thing they knew to do was to fly every aircraft out of Taliban hands,” the official said, adding: “They believed in us.”

The Taliban did not immediately reply to a request for comment on the Afghans in the Uzbek camp.

However, a senior Taliban leader, speaking to Reuters after the fall of Kabul, said his forces had captured drones and helicopters. But he longed for the return of the Afghan aircraft in Uzbekistan.

“Inshallah we will receive our remaining aircrafts, they are not in Afghanistan,” he said.

The Taliban, which had no aircraft yet won the war, have also said they will be inviting former military personnel, including pilots, to join their new security forces. It says there will be no reprisal killings.

On Wednesday, officials from the U.S. government arrived at the camp to take biometric data from the Afghan personnel there, the pilot said.

“Fingerprints and also checking the IDs,” he said.

The State Department did not respond to a question from Reuters about the visit.

The appearance of the U.S. personnel lifted the mood somewhat, the pilot said, but there was still no clear indication of whether help was on its way.

The further the Taliban gets in establishing its government and relations with neighbors, the more risky their situation could become, the pilot said.

Experts on the region like Herbst, the former U.S. ambassador, say Uzbekistan has every reason to seek a working relationship with the Taliban. That fear is shared among the Afghans at the camp.

“Most of the Air Force personnel, especially the pilots, they are educated in the U.S.,” the pilot said. They cannot (go to) Afghanistan and also those countries which probably … in the future will have good relations with the Taliban.”

Taliban Parade To Show Off Captured US Military Equipment

Graffiti Art From Around The Globe- COVID-19

Are you in the Stock Market? Don’t miss to file ITR-3. Find out Why?

Graffiti Art From Around The Globe- COVID-19